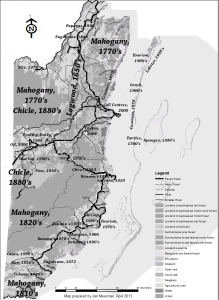 Belize is an independent, English speaking country comprising a 22,962 km2 (8,867 mi2) slice of land on the eastern coast of Central America.  Belize is at the southeast corner of the Yucatan Peninsula.  The name Belize used in this book covers time starting from the prehistoric era and continuing through the first occupation by Europeans, the colonial period, the present and the future.

The land which is owned by the nation state of Belize was first occupied by Paleo-Indians who settled the Western Hemisphere some 15,000 years ago. The Paleo-Indians preceded the Maya who created the first civilization in Belize.  Five hundred years after the decline of the Maya civilization, the modern state of Belize was founded by the British who settled the country to extract resources.

Belize is located south of Mexico’s Yucatan Peninsula, to the East of Guatemala and north of Honduras. Belize is directly bordered by Guatemala in the West and the South and Mexico in the North. Belize’s geographic coordinates are between 15º 53′ to 18º 30′ north latitude and 87º 15′ to 89º 15′ west longitude. This puts Belize in the Subtropical Zone.