Home/Uncategorized/Varenyky and the Mennonite culture

Last Friday, fitting in line with our busy day job schedule, we were able to get lunch at 2:30 at the Golden Corral in Spanish Lookout.    I had Varenyky for the first time.  This is the traditional Mennonite food which this Belizean ethnic group picked up somewhere on their sojourn in Russia.  Varenyky is a dough somewhat like fried jack but is prepared with cream cheese inside.  A cream gravy is then poured over.  Read more about the Mennonite culture taken from Belize Facts and Figures below.  The book will be launched in May or June of 2015. 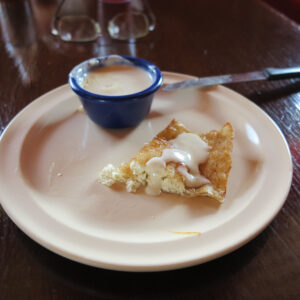 The Mennonites are another important cultural group which has found a home in Belize.  The Mennonites are descendants of Anabaptist followers of Menno Simmons, a Catholic Priest who left the church and accepted “believer’s baptism” around 1536.  The Anabaptist faith grew in Europe in the 1700s.  Within the Mennonite community, there are a number of different congregations.  These include the Sommorfelder, Rheinlander, Altkolonier and Kleine Geminde denominations.  The Mennonites speak Plattdeutsch or Low German.

The Mennonites of Belize immigrated from Quellen Colony in Mexico in 1958.  In 1957, the Colonial Government of Britsh Honduras and the Altkolonier, Sommorfelder and Kleine Geminde Mennonites signed a special agreement called a Privilegium which gave the Mennonites special privilages in Belize.  This Privilegium exempted the Mennonites from participation in any Social Security System and permitted them to use their own education system.  Only the Altkolonier, and Kleine Geminde actually settled in Belize the following year and were followed by the Rheinlander congregations.  Keeping to their tendency to wonder, a number of families have left Belize and have immigrated to Bolivia or back to Canada over the past twenty years.

The Altkolonier, Rheinlander and Kleine Geminde congregations who came to Belize started numerous communities including Spanish Lookout, Shipyard and Blue Creek which are their most prosperous centers.  Other communities include Upper and Lower Barton Creek, Springfield and Pine Hill.

Mennonites are a diverse group based on how they interpret the Bible and their acceptance of technology.  They can range from highly technical and globally competitive farmers who use the latest satellite technologies to technology-averse farmers whose religious beliefs limit them to use only horse drawn carriages and restricting them from using air filled tyres thus causing them to rely only on iron wheeled tractors.

Traditional Mennonite women use a dark colored dress called a Kleid and a bonnet called the Mach while the men use an overall called a Schlobbekson.

Mennonite foods include varenyky which is a dough prepared with cream cheese inside and a cream gravy.  Ruchvouch is a pork sussage.

Mennonites do not belive in music but celebrate Christmas, Easter, Pentecost and Ascention Day.  Besides the Bible, the Mennonites study the book, The Myrtyrs Mirror, by Thieleman J. van Braght who documents the presecution of the Anabaptists in Europe. 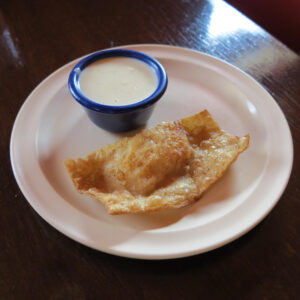 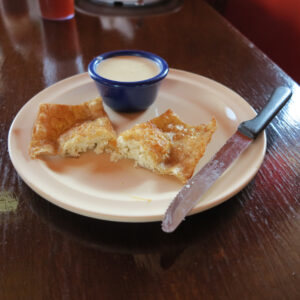