I hope everybody is well in the villages, towns, cities and countryside of our sweet little country this evening.

While writing Belize Facts and Figures, I travelled up and down our nation, mainly to take pictures  but also to get a feel of some of the places that I had never seen before.

To be honest, my favorite was San Benito Poite where I went with my friend Chris Nesbitt  to see the abutment of the ancient Maya bridge.  The archeologists say its very rare to find the remains of an ancient bridge in our region.  Thinking of the south, I still need to travel to Machakila to take a book.

Travel distance between the major towns is one of the topics in Belize Facts and Figures.  I logged many of these roads personally because such information is not readily available.  For example, I’ve never seen an official source of the distance from Belmopan to Spanish Lookout.

For those of you all who need to know the distances between different points in the country, I attach a bit of content from Belize Facts and Figures.

Have a productive week people. 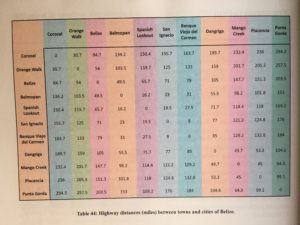