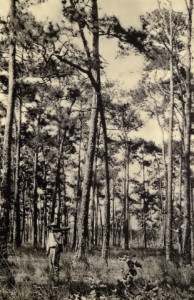 After chicle, the next timber industry which was important to Belize was the pine (Pinus caribaea) industry.  Pine wood was used locally as posts for the telephone system in Belize City in 1902 and an industry was being contemplated as early as 1903.  Around this time, only limited extraction was being done at locations like Sapodilla Lagoon, Mullins River, Duck Run and the Stann Creek Valley where a small sawmill was located.    Hoping to create new opportunities, government granted an extraction concession to the Buckner Chipley Company of Florida in 1904 but only limited expansion of the industry occurred.  Greater use was developed when the Stann Creek Railway began to use pine as sleepers in 1907.

Besides pine lumber, pine trees were also used to produce rosin by the Hercules Company of Mango Creek.  A company called Minter Naval Stores based in San Ignacio was also producing turpentine in the Mountain Pine Ridge in the 1960s.  These efforts only lasted for a brief period.  Along with the companies that attempted to produce chemical products from pine, a notable Middle Eastern (Lebanese Belizean) entrepreneur who extracted pine from the Mountain Pine Ridge (M.P.R.) was Mr. Wahib Habet. Habet constructed a large sawmill at San Luis in the M.P.R. and processed pine, mahogany and cedar lumber.

A few years after independence, three new companies started making use of the pine resource at the M.P.R.  Around 1986, Joe Badi Mena started the Wood Depot and Escandar Bedran started Pine Lumber Company.  Alger Bradley’s Toucan Match Factory also entered the business of producing match splints around this time.  The Wood Depot began producing utility poles and lumber while Pine Lumber Company specialized in outdoor furniture, moulding, pet houses and fence posts.  The Wood Depot and Pine Lumber Company were strongly affected when a nationwide infestation of the Southern Pine Beetle (Dendroctonus frontalis) occurred between 1999 and 2003.  The Pine Beetle affected 80% of the trees, killing hundreds of acres of pure stands of pine.