Prologue to: A History of Enterprise in Belize 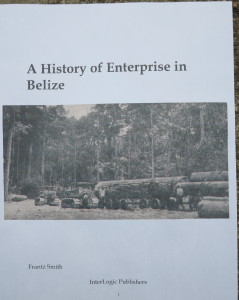 Prologue
As Belize enters its third decade of independence, we are faced with many economic opportunities as well as threats to our laid back but self-sustaining way of life. Globalization has eroded the market preferences for our traditional exports and our main industries are under threat; we need new industries to feed ourselves and our children. This is not a new phenomenon in our country but we need to pool our brains to understand the problems and create solutions. This book attempts to understand the problem of having a small productive base. We will detail the growth of our domestic and export industries from the days of the logwood trade to the present day entrance of Business Process Outsourcing (B.P.O) companies into the country.

Our discussion will include the industries that have been successful as well as those like sponges, tobacco, ramie, ipecacuanha, winter vegetables and cohune, etc. that have not survived. The conclusion of the book proposes actions which Belize can take to provide more economic opportunities for its citizens. These proposals refer to a high technology agenda as well as the development of our traditional industries which have remained flat for the last ten to twenty years.

Income from the traditional industries has not grown significantly because management has not found innovative ways to cut costs or produce more with less inputs; it has been “business as usual.” Also, we have not responded to our challenges with a high degree of urgency. Our industries have traditionally procrastinated in adopting new technologies and adapting to market forces. Besides being slow to adapt, we have not taken advantage of many of the resources which our country possesses. Now more than ever, we need to leverage our resources to provide jobs for the constantly increasing population. Besides the physical resources which our country possesses, our most precious resource is the time which we have available to do work. As a country, we need to do a better job of using the fifteen hours that each citizen spends awake on a daily basis.

The book will also document how some of us have used our time to accomplish the major milestones in our industries. It will show that most successful entrepreneurs in our country are people who have started companies which have used their workers’ time for the benefit of the enterprise. A number of Belizeans have gotten very rich in this way. We need more of this spirit in the country and we need to teach this worldview to our young generation. We also need to teach our children about the industries on which the foundations of Belize were built.

The extractive industries
The first industrialists in Belize were the Maya who had developed different products in the food, clothing, shelter and defence sub sectors of their economy. The first industries which the Europeans developed in Belize were based on extraction of wood from Belize’s forests. First, there was logwood which the British started to extract or steal from the Spanish who were in the process of dominating the Maya in southern Mexico. Soon after, the British enslaved Africans to conduct the work of logwood harvesting. After logwood, mahogany extraction was started in the 1770s. When logwood (Haematoxylon campechianum) and mahogany (Swietenia macrophylla) (King) incomes declined by the mid-to-late 1800s, there were few private companies, schools or expanding sectors of the economy able to absorb workers who had served the forestry industry for all of their lives. The streets, sanitation, drinking water storage tanks, and hospitals did not reflect the billions of Pound Sterling worth of forest products which had been extracted from Belize in the two centuries prior.

From the mid 1800s, diversification of Belize’s economy away from forestry was seen as important for the development of the country by persons such as Dr. Frederick Gahne who was the publisher of the Colonial Guardian Newspaper. In fact, samples of Belize coffee, cacao, pimento, cotton, cohune oil and sarsaparilla were sent to the British Board of Trade for evaluation as potential economic crops. However, the people with money in Belize would only consider timber and commodities like coconuts, bananas and sugar as viable exports.

Despite the lack of interest in agriculture by the elites and the government, sugarcane became the first commercially important agricultural product in the mid 1800s. This was only possible because Mexican Mestizos brought a sense of urgency and their own workers to create an economic activity in their new home. Agriculture progressed slowly because land was in the hands of a few owners who also controlled the labor pool. The mercantilist policies of Britain also meant that none of the monies derived from timber exportation could be invested into developing spinoff agricultural industries like vanilla, sarsaparilla or pimiento, etc.; all the profits had to go to England. By the late 1800s, the sugar industry was almost nonexistent.

However, by the late 1800s, the colonial government’s outlook on agriculture began to change. The first government intervention in agriculture came in the form of the issuing of Ordinance No. 1 of 1892 by Governor Cornelius Alfred Moloney. This provided for the establishment of a Botanical Garden. The Botanical Garden was opened in 1892 on one acre of land at the Government House which was previously used as the home garden of the Governor. By December 1894, 16,829 plants had been sold and 8,195 given away free at this location. Because of the soil and wind limitations of the Government House site, the Botanical Garden was an unsuccessful effort in the creation of new industries.

The transition to more technical pursuits

After the economy began to expand at the turn of the twentieth century, a Botanical Station mandated to conduct agricultural experimentation was opened in 1909 on 16 acres of land located 6 miles up the Belize River at Bolton’s Bank (near to the Philip Goldson International Airport).

During the period before the opening of the Botanical Station at Bolton’s Bank, another institution that was being called for was an Industrial School. The sentiment was that an Industrial School attached to an estate was needed to “teach scientific agriculture to the children of wood cutters”.

The newspapers were suggesting that the idle life in Belize would cause the “degradation of character” and the “injury of the morals” of the town’s youths. This belief indicated two things. Firstly, it showed that at the turn of the previous century, some Belizeans recognized the connection between a viable economic activity for the youth and the social stability of Belize. Secondly it showed that citizens realized that a higher level of brain power would be required to achieve the necessary transition from natural resource extraction to agro-industrial production.

The Industrial School concept floated about for close to twenty years but the school was not opened until 1928 in Pomona. The school took on more of an agricultural focus although the students were producing sugar from the time the school was started.

The Industrial School was instrumental in producing budded citrus plants for the infant citrus industry. The school hosted Mr. Griffith Greenwich Robert Sharp on his visit to investigate the possibility of investing in citrus in Belize. Mr. Sharp eventually contracted the school to pack his first shipments of fruit for export. The school was closed in 1939 and transferred to Airport Camp. After this, the school was moved to Baking Pot and became the Listowel Boys School.

In 1952, the Technical High School was created and it eventually became the Belize Technical College which pioneered technical and vocational education in modern Belize. The Jesuit-run Lynam Agricultural College was also opened in 1953 in the Stann Creek District but this was closed in 1971. Both institutions tried to marry academic and practical training but the contact with industry was starting to erode. There was only a limited amount of monies being earned by either institution from industry.

After self government was achieved in 1964, the government focused on upgrading the skills of the civil service but local technical training was available at the Belize School of Agriculture (B.S.A.) by 1977. The school started offering a one year certificate course in practical agriculture with the research staff of the Central Farm Agricultural Station seconding as the teachers. In 1981, an optional year was added for the awarding of a diploma. Two years later, a full two year diploma course was established and the certificate and optional diploma were discontinued. Industry provided scholarships to the BSA, but private sector companies were not engaging goods or services from the school. Development in staffing continued and the name of the institution was changed to the Belize College of Agriculture (B.C.A.) in 1986 which was one of five institutions amalgamated to form the University of Belize (U.B.) in 2000. Under the U.B. umbrella, an Associate’s Degree was offered at Central Farm under the Faculty of Agriculture and Natural Resource Management (F.A.N.R.). In 2008, this Associates program was reconceptualised as a part of the Department of Agriculture under the Faculty of Science and Technology.

Besides agriculture, the most recent attempt at technical education has been the Institute for Technical and Vocational Education and Training (I.T.V.E.T.) institutions which evolved from the Centre of Employment Training (C.E.T.). Much of the potential of the I.T.V.E.T. institutions remains unfulfilled as the major industries have not contracted services from the institutions and many Belizeans do not see the tremendous good that I.T.V.E.T. can offer to industrious students. This can be fixed by making the I.T.V.E.T. a pathway to higher education for technical workers and a resource which industry can use to mould and recruit talent. This book will document the achievements of our investors and workers and will assist the reader to understand the challenges and opportunities that Belize offers to entrepreneurs.

2 Responses to Prologue to: A History of Enterprise in Belize