While the first bust cycle in logwood was occurring in the 1770s, Belize’s early settlers were able to start the transition to a new resource for extraction and mercantile trade with Britain: mahogany (Swietenia macrophylla). Belize mahogany was very valuable because it was easy to work by sawing, drilling and mortising and because it would not change shape when it became damp or split if it became very dry. Belize mahogany was known to be perfect for making doors and window frames, furniture and railroad carriages in the peculiar British climate. Furniture manufacturers in England like Thomas Chippendale and George Hepplewhite created high priced furniture from Belize’s mahogany. 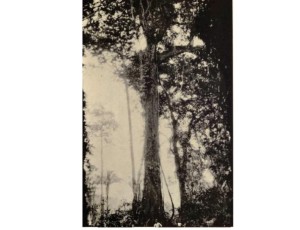 Extraction of mahogany in Belize was a more difficult process compared to logwood harvesting because mahogany were much larger trees which had to be extracted as 10-20 feet logs. The major processes required for this trade included (1) locating mahogany trees, (2) felling the trees, removing the limbs and cutting the trees into manageable logs (3) moving the logs to the banks of major rivers, (4) slipping the logs into the rivers in the rainy season, (5) storing the logs at booms, (6) sorting the logs per owners at the booms, (7) floating the logs to the river mouths, (8) squaring the logs and (9) loading the squared logs or lumber on to ships bound for Europe. 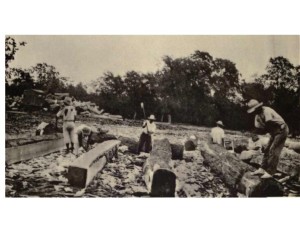 These steps required a technological shift away from the era of logwood exploitation. Differences between the industries included the fact that mahogany trees were much more difficult to locate because these were randomly distributed throughout the land. Secondly, mahogany trees were much larger and they required more advanced technology for felling. This prompted the development of “barbeques” which the axemen would build above the buttress roots of the trees to avoid chopping into the buttress roots. The barbeques were often made 10 to 12 feet off the ground. It is said that two men could fall a tree per day on contract work. While axemen were felling the trees, other workers in the gang would clear a path for the transfer of the tree to the nearest water course. This was different from logwood which was carried as small blocks which an individual could manage. Haulage of large 10 or 20 foot mahogany logs was a process requiring much more manpower. As a result, the British began importing more and more African slaves into Belize.