According to Governor Eric Swayne, the first method of mahogany haulage involved slaves heaving the logs into place and using rollers to “skid” the large logs into the nearest river (Swayne, 1917) (Figure 8). 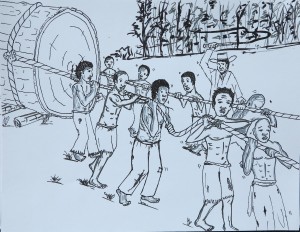 In his writings, Leo Bradley states that this part of the work was done at night (Bradley, 1966). The logs were transported to river banks and left to accumulate until the beginning of the rainy season.  When the rains started, the logs would be slipped into the fast moving water.  At the time, this was the most efficient form of transportation of logs down forty or fifty miles of territory to the nearest boom.  A boom was a heavy iron chain fixed across a major river.  For the Belize River, the boom was located at St. James which is now called Burrel Boom.  At the boom, the logs were held back by the chain then they were sorted and nailed together into rafts belonging to the same owner.  These rafts were then floated down to the coast.  In the case of mahogany from the Belize and Cayo Districts, the destination was Belize City.  Human haulage of mahogany lasted until 1805 when oxen were introduced to haul the giant mahogany trees (Dobson, 1973).