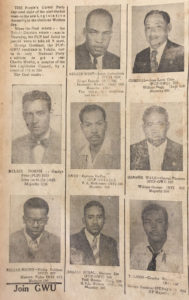 A pleasant morning and a blessed Independence Day to you.

I just wanted to remind you all that the independence movement started from December of 1949. This set the stage for the elections of 1954 which confirmed the population of Belizeans wanted independence.  In this elections there was one mass party, a new mass party called the PUP.  It took 8 of the 9 seats.  Featured in this Belize Billboard photo are the winners of the elections:

Apparently the Billboard did not have a picture of Mr. Nathaniel Cacho from Stann Creek.

This was a bold and sacrificial move that these two men made. If they had not gone out and formed an opposition, it is possible that Belize could have gone down the road of one party rule.  This would most likely have caused a very extractive form of government and set the stage for revolutions and counter revolutions.

Just a few things to think about on our birthday.

Happy Independence Day Belize, and don’t forget to be grateful to God for sending the people who worked for this achievement!!!