Home/Uncategorized/Belize Facts and Figures: The significance of the Battle of St. Georges Caye 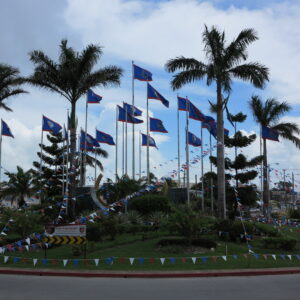 Wishing you all a happy 10th September.  In honor of this day, I am posting a little article on the significance of the Battle of St. Georges Caye.  If there were no 10th, there would be no 21st.

Conflicts between the Buccaneers and the Spanish

As the settlers in Belize were becoming wealthy, Spain began to become weary of them making money in what she believed was her territory.  From the early 1700s, Spain began to send troops to expel the settlers.  Such moves by Spain was in line with the fact the Britain and Spain became engaged in the “War of Jenkin’s Ears” and the “Seven Years War” between 1739 and 1763.

Britain realized that it was not in her interest to be constantly engaged in War with Spain and negotiated various treaties that had repercussions in Belize.

The Treaty of Paris signed in 1763 ended the “Seven Years War” and gave the English the right to cut and carry logwood in the territory of Belize.  It required that all fortifications in the settlement be demolished and reserved Spanish sovereignty over the land.

Subsequent to the Treaty of Paris was the Treaty of Versailles of 1783 which affirmed British rights under the 1763 Treaty and defined the area they could cut logwood as the area between the Belize River and the Rio Hondo.

The Convention of London of 1786 extended the area from which logwood could be extracted from the Rio Hondo to the Sibun River.  This treaty also legalized the extraction of mahogany by the British.  Extension of the Belize territory was a Spanish concession in exchange for the British withdrawing from the Mosquito shore.

During the time that these three treaties were signed, the importance of logwood started to decline.  This was because, by the late 1770s, there was an oversupply of this material in Europe.  During this downturn, the settlers in Belize started to harvest mahogany.

Although Spain had not occupied Belize, she never appreciated the settlement of the British in this area.  Attacks on Belize were made from Mexico as early as 1716.  Other attacks followed in 1718, 1730, 1733, 1737, 1745, 1754 and 1779.  In the last of these attacks, the settlers of Belize were captured and marched to Merida before being sent to the dungeons in Havana.  Many of the settlers died but those that survived were released in to the British Government in 1782 and they returned to Belize shortly after.

The Battle of St. George’s Caye

After this vote, an order was made that all males were to divide their time between matters of defense of the settlement and personal matters.  A Spanish attack was expected and the colony went into Martial Law on July 26, 1798.

The Spanish armada was sighted two months later on September 3rd.  In total, the Spanish brought 31 vessels with 2,000 foot- soldiers and 500 seamen under the command of Field Marshal Arturo O’Neil.  O’Niel anchored the main fleet between Long Caye and Caye Chapel.  Standing against the Spanish were: His majesty’s Sloop the Merlin commanded by Captain John Ralph Moss, two other sloops the Towser and the Tickler, The Mermaid, two local scooners the Swinger and the Teaser and seven gun flats manned by the Africans.

The first Spanish attack was launched on September 3 when five Spanish Ships attacked Montego Caye but these could not break the defense lines of the sloops and the gun flats.

The following day, the Spanish attempted the same maneuver but were repelled by three armed ships.  The slaves on the gun flats also removed the stakes and beacons which the Spanish had placed to mark a passage through the reefs.

The most important engagement of this episode in Belize’s history occurred on September 10, 1798.  On that morning, fourteen of the largest Spanish ships moved aggressively toward St. George’s Caye but were held off.  The stalemate lasted until early in the afternoon, when Captain Moss gave to order to begin firing on the fourteen Spanish vessels.  Moss was able to overpower the enemy and the battle lasted for two and a half hours.  After this, the Spanish fell into confusion and they cut their cables and fled.   Captain Moss signaled for his vessels to pursue the retreating Spanish.  Because night was approaching, the chase was called off.  Belize Facts and Figures Table of Contents March 17 2014