Home/Uncategorized/Belize Facts and Figures: The Population of Belize

The most important resource that Belize has is its people.  Our population is important because it is made of people of differing ethnic origins who develop different ideas on how to protect the country and to create opportunities that lead to employment of other citizens.

For many years, the Government department that was mandated to keep data on the population of Belize was the Central Statistical Office (CSO).  This function is now provided by the Statistical Institute of Belize (SIB) which was established in 2007.

The CSO conducted population censuses every ten years usually at the beginning of a decade.  The SIB continued this practice.  In the years when censuses were not taken, mathematical formulas called models were used to estimate the population of the country.  These data were published in the Abstract of Statistics of Belize and are presented in the Table below.  In this table, the population for 2010 is based on the Population Census of 2010.

Table 1: Growth of the population of Belize 1981-2010.  (Source: Statistical Institute of Belize)

Apart from the fact that the population of Belize is growing, it is know that Belize is an ethnically diverse nation.  Table XX shows that there are at least ten different ethnic groups in the country.  The table also shows that the ethnicity with the highest representation is the Mestizo group.  The Mestizo are followed by the Creoles and the Maya.  This is unlike in past years when the Creoles were the most prominent ethnicity in the country. 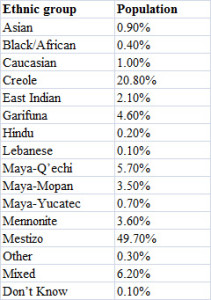 There is a great diversity in the number of religions and denominations operating in Belize.    These range from the Christian Faiths to Eastern Religions such as Buddhism and Hinduism.  There are also a small amount of Moslems, Bahai and Rastafarians in the country. 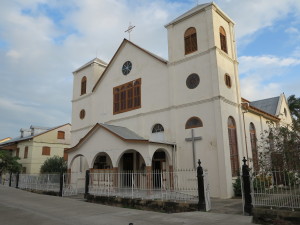 Table 3: Changes in the religious make-up of Belize. (Source: Statistical Institute of Belize) 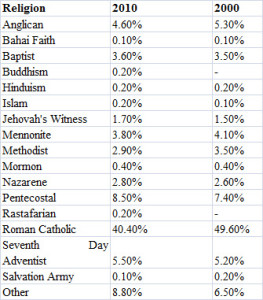 The largest segment of the population subscribes to the Roman Catholic faith.  The figure of 40.4 % for Catholics in 2010 represents a decrease from a level of 49.6% in the year 2000.  During this same time period, the percentage of people claiming no religion has increased from 9.4% to 15.6%.  This means that Belize is becoming a country with lesser religious convictions.