Home/Uncategorized/What happened to the eight railways that were used to haul produce and mahogany in Belize? 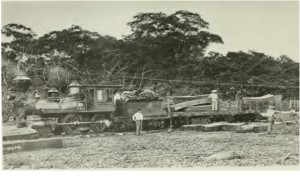 The second rail was built at the Vaca Falls area in the Cayo District.  A railroad was also built at the B.E.C. estate between Gallon Jug and Hill bank in the Orange Walk district (Figure 10).  A overhead cable line was also built in Mullins River.  Besides these, there were 5 other smaller railways build at isolated locations in the country (See: Weaver, P. L., and Sabido, O. A. (1997). “Mahogany in Belize: A historical perspective.”)

There was only a brief romance with steam engines for mahogany extraction in Belize because more practical types of engines were soon introduced.