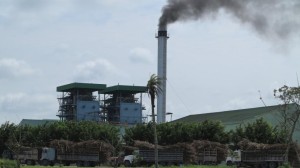 The sugar industry was started shortly after Mestizo refugees from the Caste War started to immigrate to Belize in 1847. One of the first Mestizo immigrants to plant cane was Don Justo Rejon.  He rented land from Mr. James Welsh for $5 per 100 mecates (13 acres) to establish Santo Tomas Estate.  These immigrants made sugar for local consumption but by 1857 they were able to send their first shipments to England.  The arrival of the American Confederates in 1865 also saw the addition of more acerages of cane in the south at farms like Spice Hill, Dixie, Big Hill, Forest Home, Little Rock, Sunny Hill and Missouri Farm. In the 1880s, the Colonial government removed a 3 cent per pound import tax on sugar from European countries and the production declined from 2,800 tons of sugar to 100 tons in 1893.  Thereafter, the industry grew slowly and the Libertad Factory was purchased from Guantanamo Cuba and rebuilt in Corozal in 1935.  The industry grew slowly until the 1950s when Belize was guaranteed an annual sugar quota by the British.

At present, over 60,000 acres of sugarcane are in production in the Orange Walk and Corozal Districts. Processing of sugar is conducted at the Tower Hill Factory on the southern outskirts of Orange Walk Town. In 2009, 917,728 tons of cane were harvested in the country. The price per ton of cane in 2011 was $72.17 which meant that over $ 61 million dollars was paid to farmers. The price paid to Belize per ton of sugar in 2011 was €335.14 or roughly $907. The sugar industry produces white sugar, brown sugar, molasses and electricity from sugarcane. The electricity is produced by the burning of sugarcane bagasse which is used to convert water to steam. The steam is used to turn turbines which produce electricity