Geology 101 for Belizean Students and Investors 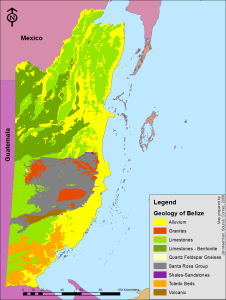 I have decided late this Sunday evening to extract a small portion of the content in the Geography section of Belize Facts and Figures and write a brief post on the geology  and to a lesser extent, the geologic resources of Belize.  The accompanying map was created by Mr. Jan Meerman.  I am fascinated with the geology of this country because there may be opportunities to attract investments for the creation of high value tiles and table tops from granite or pink limestone.  One company tried but did not do the necessary ground truthing to find the correct type of unfractured granite.

The geological resources of Belize include oil, clays, barite, sand and gravel, granite, gypsum, quartz sand, dolomite and limestone.  There are indications that Belize may have deposits of molybdenum in the Maya Mountains.  Sites with high quality silica deposits have been identified. A few rubies are said to have been discovered in the south of the country during colonial times.  Oil has been extracted from the Spanish Lookout Reservoir since 2006.  This oil is located at a depth of 3,000 feet.

Between 1999 and 2008, 2,300 ounces of gold were extracted from the Ceibo Chico area of the Maya Mountains by  a Belizean company.  The other area with gold potential is the mountain watersheds adjacent to the Sittee River and the Raspaculo branch of the Macal River.

The Geology of Belize

The geology of Belize can be divided broadly into the Northern Lowlands, the Maya Mountains, the Toledo Beds and the Pliestocene deposits, but there are other features including volcanic deposits of bentonite in the north and volcanic outcrops along the southern boundary of the Maya Mountains.

The northern lowlands are made up of heterogeneous limestone sediments which are referred to as the Yucatan Platform.

South and west of the country are the Maya Mountains.  These mountains are the most impressive geological feature in the country and are composed of volcanic and sedimentary rocks that have become metamorphosed or chemically altered.

The oldest rocks in the Maya Mountains are granites that occur at the Mountain Pine Ridge. These granites were formed when magma cooled below the earth’s surface about 360 millions of years ago.

The second oldest rocks in Belize and the Maya Mountains comprise the Santa Rosa Metasediments which were formed about 330 million years ago.

In the southern areas of the Toledo district, gravels, sands and muds dominate the geology.  These are called the Toledo Beds and consist mainly of thin bedded shales and mudstones, with some blue calcareous (calcium derived) sandstones and patches of limestone.

The full details of the Geology, Geologic History and Geologic Resources of Belize will be featured in Belize Facts and Figures in which will go on sale in early 2016.  Spread the word.