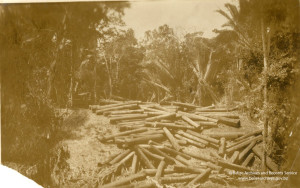 The Forest Trust ≈ 1922
By the early 1900s, it was commonly known that the primary hardwoods such as mahogany and cedar had been cut over multiple times on many mahogany works in Belize. A report commissioned by the Colonial Research Committee between 1920 and 1921 (The Hummel Report of 1921) confirmed that much of the accessible Crown lands of the colony were seriously depleted of mahogany and that the chicle industry was in decline because of unsustainable tapping methods. A four-pronged forest policy elaborated by the Hummel Report included efforts to (1) decrease the costs of extraction using better logging methods, (2) use silvicultural management of mahogany in favourable areas, (3) develop the secondary species and (4) improve communication in the colony through more systematic exploitation and less “hand-to-mouth” forestry.

In line with these new goals, the Forest Trust was established in April of 1922 with Cornelius Hummel as the first Conservator of Forests. Shortly after, five forest reserves were declared: Silk Grass Reserve, Punta Gorda Reserve, Belize Pine Reserve, Sibun-Stann Creek Reserve and Tillett’s Pond Reserve (adjacent to the Botanical Garden in the Belize District). The Freshwater Creek Reserve was added in Corozal in 1926. These reserves were created to improve the sustainability of wood extraction and implement the first attempts at forestry science in Belize.

The first effort in scientific forestry was the devising of a method of mahogany silviculture at the Botanical Station on the Belize River. These initial experiments were the basis for further research in the area of mahogany and sapodilla improvement in Belize. Apart from the Botanical Station, efforts in scientific forestry extraction focused on exploration, silvicultural improvements, secondary species and fire control.  The Forest Trust eventually became Belize’s Forestry Department.